1735: Jehan-Jacques Blancpain made his first watches

Established 1735, Blancpain's expertise comes to the fore in complicated timepieces, for which the company can count on the expertise of its own movement development and production unit (formerly Manufacture Frédéric Piguet). Its realizations include, in 2008, the first one-minute flying carrousel ever incorporated into a wristwatch. The brand further distinguished itself in 2012 with a traditional Chinese calendar watch, another world-first that came to fruition after a long period of research.

At the same time, Blancpain has made its name as a partner to sporting challenges, including the Lamborghini Blancpain Trofeo racing championship, in partnership with the Italian sportscar manufacturer. It is also prominent in the world of the open sea, not least thanks to the legendary Fifty Fathoms. Water-resistant to 91 metres (50 fathoms) and developed in 1953 for French naval combat divers, it was also the watch chosen by Jacques Cousteau when filming The Silent World, which won the Palme d'Or at the 1956 Cannes Film Festival.

When in 1735 Jehan-Jacques Blancpain opened his watchmaking workshop in the Swiss Jura, he sowed the seeds of a horological dynasty that would last for almost two centuries. Located in Villeret, the company quickly proved capable of moving from small-scale, artisanal production to industrial manufacturing concepts. This proved a wise decision, thanks to which the firm was able to grow and also survive the economic setbacks that befell the Swiss watch sector. In 1926, Blancpain incorporated John Harwood's invention into one of the first ever self-winding wristwatches. In 1932, no longer in family hands, the company changed its name to Rayville SA. Despite this, production continued in the same spirit as before. Part of the SSIH conglomerate since 1950, it was bought by Jean-Claude Biver and Jacques Piguet in 1983. At a time when quartz ruled, the two entrepreneurs chose the opposite route by applying the now famous slogan, "Blancpain has never made a quartz watch and never will." In 1992 Blancpain became part of Swatch Group and since 2002 has been under the stewardship of Marc-Alexandre Hayek.

Fifty Fathoms, the first modern diving watch, water-resistant to 91 metres, was worn by French Navy divers and by Jacques Cousteau while shooting "The Silent World", winner of the Palme d'Or at the 1956 Cannes Film Festival.

Creation of the Ladybird, whose 15.3mm diameter made it the smallest round movement of its time.

Smallest minute-repeater movement of its time.

Thinnest self-winding chronograph of its time.

Thinnest split-seconds chronograph of its time.

Thinnest flying tourbillon wristwatch of its time with an eight-day power reserve.

Creation of six watches with identical cases, each corresponding to one of the Six Masterpieces leading to the grade of Master-watchmaker:

Presentation of the 1735 grande complication watch with all six "masterpiece" complications. Produced as a limited edition of 30, this self-winding watch was the most complicated ever made at that time.

First movement with an automatic winding split-seconds chronograph combined with flyback and tourbillon.

Launch of the Blancpain Women collection.

Tourbillon Semainier, an unprecedented combination of complications with a seven-day power reserve.

The 13R0 hand-wound base movement with three barrels for an eight-day power reserve, and bi-directional rapid date-change mechanism. 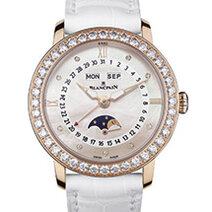 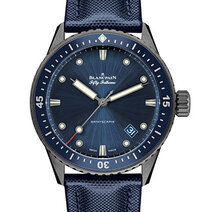