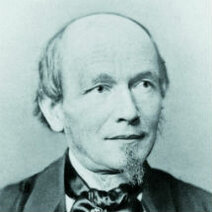 After an apprenticeship in Dresden, he moved to Paris where he studied under the chronometer-maker Joseph Thaddéus Winnerl.

In 1844, he invented the Glashutte lever escapement.

During his tenure as mayor of his birthplace, Glashutte in Saxony, between 1849 and 1867, he transformed the town into the centre of precision watchmaking in Germany.

On his death, he left his company, A. Lange & Söhne, to his sons.

Founder of the A. Lange & Söhne factory and the clockmaking industry in Glashütte (near Dresden).