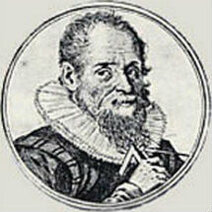 Mechanic to the margraviate of Hesse (Germany), from 1595.

In Prague, worked with astronomer Johannes Kepler (disciple then successor to Tycho Brahé). Under the reign of Jost Bürgi, Kassel (margraviate of Hesse), Prague became one of the major European centres of astronomy and Tycho Brahé came to work there before creating the Uraniborg Observatory (on the Danish island of Hveen). Construction of six globes including four for Landgrave William IV of Hesse. One of them, made in 1594, is both a civilian clock and a 14.2 cm diameter moving representation of the celestial sphere that automatically represents the position of 1,000 stars. It is exhibited, since 1978, at the National Swiss Museum in Zurich.

Bürgi was interested in logarithms, an invention that significantly improved astronomers' calculation methods. Jost Bürgi is said to have drawn up a logarithm table in the early seventeenth century (without publishing them) before Napier (1614 and 1617).