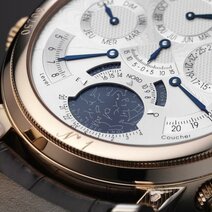 Astronomical watches display a variety of information relating to the movement of the heavenly bodies. Although many of their functions no longer have a practical purpose today, they testify to extraordinary savoir-faire and continue to enthral.

The pocket watches of the Renaissance owed much to the great astronomical clocks of the fourteenth and fifteenth centuries, themselves inspired by the astrolabes and mechanical calendars of previous eras. At a time when the minute hand - which only became widespread from the late seventeenth century - had yet to be invented, these watches displayed the hour, date, days of the week with their symbols, months with their duration and planet, moon phases, "age" of the moon, and the signs of the zodiac. Astronomical watches such as these were in vogue throughout the seventeenth century in Europe and the Middle East, where they appealed to followers of physical and occult sciences. This was an era fascinated with astronomy, the study of the structure, movements and evolution of the heavenly bodies, but also astrology which sought to identify the possible influence of the planets on Man and Nature.

Today, these astronomical functions are most likely to be seen on ultra-complicated watches, be they pocket or wristwatches. Works of scientific, technical and human genius, these exceptional timepieces present an array of often highly complex functions: sidereal time, equation of time, sunrise and sunset, star chart, angular movement of the moon, moon phases, systems for predicting solar and lunar eclipses, the position of the stars as seen from Earth, solstices, equinoxes and seasons, and the signs of the zodiac. Many of these functions are determined for a single viewpoint.