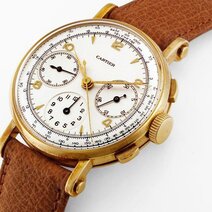 Chronograph watches have an additional mechanism for measuring and displaying elapsed time. This especially useful complication calls for an elaborate construction, particularly in its most noble form, the "column-wheel" chronograph.

The chronograph is one of the most recent complications, appearing only in the nineteenth century. Indeed, watchmakers had other considerations to contend with first, namely achieving adequate precision and finding a way to stop and start a hand without also stopping the movement ("independent seconds").

Following unsuccessful attempts by John Arnold, Parisian watchmaker Louis Moinet (1768-1853) imagined a device which measured sixtieths of a second. He named his invention "compteur de tierces". A "tierce" or "third" is the next sexagesimal subdivision of the hour after the minute and the second, used in astronomy. Moinet built his counter with the help of a watchmaker employed by Abraham-Louis Breguet in 1815-1816. On September 1st 1821, Nicolas Mathieu Rieussec (1781-1866), horologist to the king, used a device of his own invention to time a series of horse races run on the Champ de Mars in Paris. A report by the Académie Royale des Sciences dated October 15th 1821, signed by Antoine-Louis Breguet and Gaspard de Prony, records that Nicolas Mathieu Rieussec presented on that day a "timekeeper or counter of distance covered" which the Academy named a "seconds chronograph". On March 9th 1822, Rieussec was awarded a five-year patent for his invention. Rieussec's counter is aptly named, as it deposits a drop of ink on the enamel dial at the beginning and end of each measure. The return-to-zero function appeared towards the middle of the nineteenth century. Now with its three essential functions of start, stop and return-to-zero, the chronograph came into its own in numerous domains, including science, technology and competition sport. The first wrist-chronographs were worn circa 1915. Like their pocket counterparts, they had just one button, usually in the crown, for all three functions. The second reset button followed in 1934. 1969 saw the first self-winding chronograph movements. The majority of chronographs use a cam to coordinate the chronograph functions. The more sophisticated use a “column wheel”, a distinguishing feature of superior quality chronographs. Further distinction can be made between “integrated” chronographs and “separate” modules that have been grafted onto the movement. Single pushpiece (monopoussoir) chronographs are a feat of mechanics, as the same button must successively start, stop and reset the chronograph hand.

The chronograph rides the vanguard of the mechanical watch revival of the late nineteen-eighties and has inspired all manner of technical and aesthetic innovations. Still, only a very few Manufactures make their chronograph movements themselves.

“Chronograph” and “chronometer” should not be confused. A chronometer is a watch whose movement has been certified by an official body as attaining a high standard of precision. While a chronograph can be certified as a chronometer, not all chronometers are chronographs.