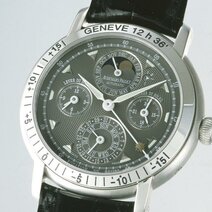 The Earth makes an elliptical orbit around the Sun; also, its axis is tilted from perpendicular to the plane of the equator. For these two reasons, a "true" solar day, which is the interval of time between two "true" noons when the Sun is at its highest point in the sky, is never the same length over the course of the year. It is exactly twenty-four hours long on just four days: April 15th, June 14th, September 1st and December 24th. In an unchanging cycle, all the other days are either longer or shorter. This difference, which ranges from less 16 minutes and 23 seconds on November 4th to plus 14 minutes and 22 seconds on February 11th, is the "equation of time".

Watchmakers have always vied to find ingenious ways to convey these celestial mechanics. Because these variations occur identically on the same dates, they can be "programmed" by means of a cam making one complete rotation each year. This extremely sophisticated complication first appeared on longcase clocks. It was then miniaturized to fit inside a pocket watch case and later, in the twentieth century, a wristwatch. Rarely seen alone, the equation of time is a "classic" feature of any ultra-complicated watch.

There are different ways to show the equation of time. Most watches prefer a hand sweeping a subsidiary dial or arc, graduated from 16 to +14 minutes. This requires a little mental arithmetic by the wearer, adding or subtracting to calculate true time from mean time. Simpler to use but more complex to make, the “running equation” (équation marchante) has two coaxial minute hands, one to show mean solar time and the other true solar time at a glance. For many years this sophisticated system was found only on pocket watches, although the first wristwatches with running equation were recently unveiled.

On the subject of innovations, watchmakers have devised systems for reading the equation of time at a specific longitude and not for an entire time zone, thereby further enhancing precision.