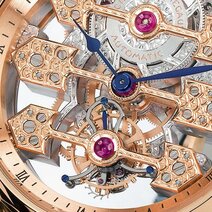 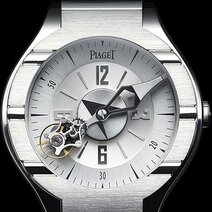 Invented to compensate the effects of gravitational force on the movement's rate, the tourbillon is one of the greatest expressions of the watchmaker's art. Only a few outstanding craftsmen possess the expertise required to build this tiny mobile cage with the balance, its spring and the escapement inside.

Pocket watches, as was their vocation, spent most of their time in an upright position. Their rate was negatively influenced by the Earth's gravitational force, in particular the balance whose oscillations were fundamental to the accuracy of the movement. In order to prevent such fluctuations, Abraham-Louis Breguet was inspired to enclose the "heart" of the watch (the balance, balance spring and escapement) in a tiny cage rotating on itself and typically completing a revolution in one minute. This allows the regulating organ to successively adopt all vertical positions, thanks to which errors of rate cancel each other out. Breguet was granted a patent for his invention in 1801. The Tourbillon remained a rare complication throughout the nineteenth century, while new challenges were raised in the twentieth century to create a tourbillon small enough for a wristwatch case. The tourbillon is now an established symbol of watchmaking excellence, and watches with a tourbillon are a growing trend. However, only a handful of Manufactures and craftsmen are truly qualified to build this tiny mechanism which concentrates some sixty to seventy parts in less than one gram.

Watchmakers continue to perfect the tourbillon, and in particular its rotational system. And while its purpose of enhancing the movement's precision is less justified in a wristwatch, the tourbillon remains a remarkable feat of technicity and a "visible" complication that continues to enthral. This tiny rotating cage (in eighteenth-century French, ”tourbillon” referred to the movement of the planets) inspires designers to play infinitely on the geometry and transparency of the dial. Recent years have witnessed a new generation of tourbillons that rotate on multiple axes. Not forgetting movements with more than one tourbillon. A flying tourbillon is mounted only on one side with no supporting bridge. The karrusel shares a similar principle to the tourbillon, except that the regulating organ rotates on a platform, much like a horse on a fairground carrousel.