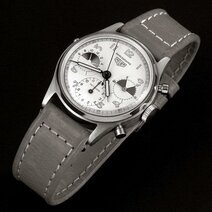 Useful to fishermen and beachcombers alike, a watch with a tide gauge indicates high and low tide times for a given location. Each lunar day of 24 hours 50 minutes has two high tides and two low tides.

Some tide-gauge watches also give tide coefficients (the variations in tidal amplitude caused by the relative positions of the Earth, Moon and Sun) together with estimated tidal height and current strength. The user must set the tide gauge for a specific latitude. For this, he or she should refer to tide tables which factor in multiple and often extremely complex data such as the influence of the planets' elliptical orbits, hydrodynamic phenomena, the shape of the coastline, and the depth of the sea at that given point.