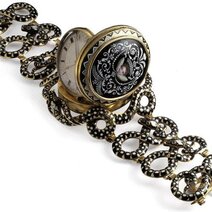 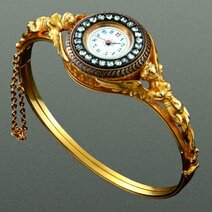 One of the oldest known wristwatches

In Paris, Josephine de Beauharnais commissioned Nitot, jeweller to Napoleon I, to create two bracelets for her future daughter-in-law Augusta Amalia of Leuchtenberg on the occasion of her marriage, in 1806, to Eugène de Beauharnais. Each bracelet was set with fifty fine Colombian emeralds and one hundred and ninety-two round orient pearls. In one Nitot incorporated a watch and in the other a calendar, both with visible dials.

Although still an exceptional sight, rectangular, oval or navette form watches trimmed with stones or half-pearls could be observed on wealthy ladies' wrists, tied by a ribbon or on a delicate gold bracelet in three parts. Similar bracelets appeared on the first ladies' wristwatches, with or without precious stones, to be manufactured in series after 1888. The lady's watch was no less coveted for its ornamental value in the nineteenth century, inspiring jewellers to propose bracelets whose imposing dimensions offered chasers, engravers, enamellers and stone-setters endless scope for expression. A miniature watch in the centre of the bracelet, which could be detached and worn on a sautoir, was concealed by a jewelled cover or by one or several precious stones, suggesting that timekeeping came second to their ornamental role. While many of these bracelet-watches were anonymous, some were signed Gregson in Paris, Robert Brand in La Chaux-de-Fonds, or such Genevan masters as Aubert, Jean-François Bautte, Henry Capt, Doehner, Terond Ravier et Compagnie.

While the jewellery inspiration was as strong as ever, the wristwatch in the 1880s no longer hid its dial behind a cover, as illustrated by the first models with yellow gold bracelets by Cartier in 1888. The first series production of wristwatches began, using standard components. Examples include models made by Louis Muller in 1888, Vacheron Constantin and their contemporaries in Vienna such as Gustav Preiss.