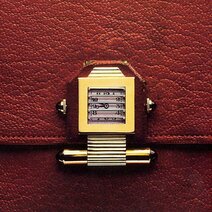 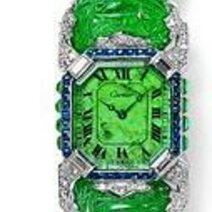 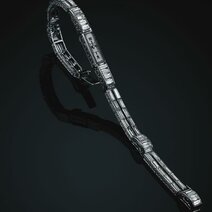 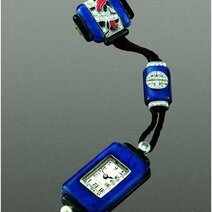 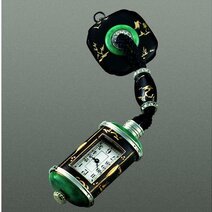 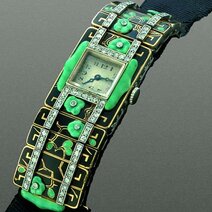 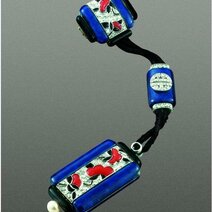 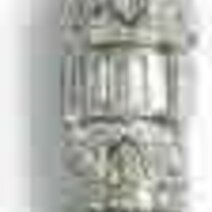 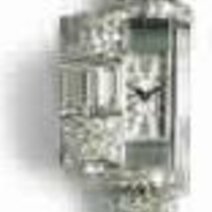 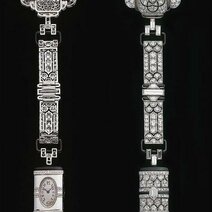 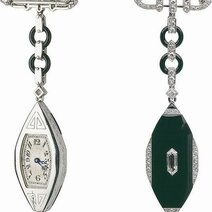 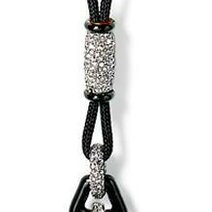 Rigorous forms and colours characterised Art Deco from 1910 to 1925. Light slid across the smooth surfaces while strict geometric patterns were composed from contrasting (diamonds and onyx) or complementary (diamonds, coral and rock crystal) stones. Another characteristic aspect of Art Deco, opaque enamel in monochrome blocks or fine lines was used to highlight motifs. Jewellers took inspiration from Indian and Oriental ornamentation, which they adapted to brooch-watches, pendant-watches and pocket watches. One such style, known as Tutti Frutti, spanned the period from the early 1920s to the late 1930s. It combined influences from Islamic religious architecture and the so-called Hindu or Indian styles. Carved rubies, sapphires and emeralds, often imported from India, were interspersed with diamonds and arranged into flowers and leaves, studded with berries and fruit. Several renowned Parisian jewellers, led by Cartier, Mauboussin and Arnold Ostertag, excelled in these compositions.

The introduction of baguette-cut stones gave new impetus to Art Deco after 1925. They commanded rather than assumed the piece's structure. Three-dimensional forms took precedence over flat surfaces. These stones perfectly mirrored the baguette-shaped wristwatch, first made by brothers Georges and Henri Verger using a movement designed during the war years by a watchmaker at Vacheron Constantin. This new shape would gain international renown that would last into the late 1930s. Its form was dictated by its proportions, being at least three times as long as it was wide. The specific mechanism, with its winding crown at the back of the case, was originally built on one level then, after 1924, on two levels by Jaeger. The first step towards miniaturisation came in 1929 with the Jaeger-LeCoultre 101 calibre, the world's smallest mechanical movement. In a jewellery version, the baguette watch is the perfect partner for baguette-cut diamonds. The same is true of the dainty navette watches, also in vogue, whose form espoused that of navette diamonds.

The Verger brothers' designs gave the eponymous company special status in the world of jewellery and watchmaking of that time. A longstanding representative of Vacheron Constantin in Paris, Verger supplied numerous famous names with baguette watches, shuttered watches, purse watches - all its own creations - and brooch-watches, some of which showed a distinct Japanese influence in their lacquered decoration.

The jewellery watch in the 1920s was so beautifully ornate and precious that it became part of evening wear. However, to satisfy the rules of etiquette, which still deemed it impolite for a lady to consult her watch in company, often the dial was concealed behind a jewelled cover for wristwatches, at the back of a pendant or chatelaine, or took the place of the intaglio on seal-watches.