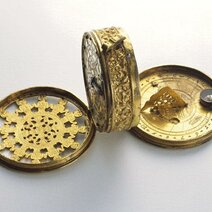 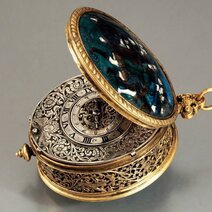 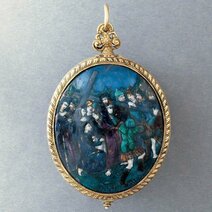 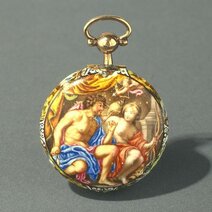 At the time of the first watches, in the late fifteenth and early sixteenth centuries, orfèvrerie, bijouterie and joaillerie formed one and the same trade. Goldsmiths (orfèvres) were engaged in the making of practical and decorative tableware, liturgical objects and ornamental objects for wealthy homes. The bijoutier was a maker of bijoux, which at that time included knobs for canes, snuffboxes and other adornments for the individual and their apartments. Diamonds, pearls and fine stones were absent from bijoux, which instead used hard stones, enamel, lacquer and niello to play on forms and colours. The jeweller, in contrast, set precious stones in precious metals.

Watches - notoriously inaccurate until Huygens' invention of the spiral balance spring in 1675 - were items of jewellery, worn conspicuously as a sign of power, wealth and intellectual curiosity. The oldest surviving examples are in brass, although written references attest to watches in gold and silver. Decorations were moulded or engraved, often pierced. Late sixteenth-century inventories, notably those of Elizabeth I of England and Gabrielle d'Estrées, describe extraordinary watches set with diamonds, rubies, sapphires, emeralds and pearls. Some were even adorned with miniature portraits in enamel. Others, now part of private or museum collections, had their mechanism set inside hollowed stones such as emerald, rock crystal, agate, garnet, jade or amber.

Enamel became an important aspect of the jeweller's work from the seventeenth century. Stones were separated by enamel portraits and patterns, for the most part executed in Limoges, while translucent enamels in blocks of colour imitated the hue and sheen of hard and precious gems. 1630 marked the advent of enamel painting. After much trial and error, Jean Toutin, a goldsmith from Châteaudun (Centre region of France), mastered a palette of thick, opaque, hardwearing enamels whose colours could be blended like oil paints. His technique was immediately taken up, and would dazzle the world for more than two centuries. Enamellers decorated watch cases using patterns taken from catalogues of engravings, such as Le livre de toutes sortes de feuilles pour servir l'art d'orfèbrie (sic) by Jean Caillart (1629), Le livre de fleurs et de feuilles pour servir l'art d'orfèvrerie by F. Lefebre (1635), and others by Jacques Vauquer, Gilles Legare and many more. Paintings, particularly works by Simon Vouet, Sébastien Bourdon and Laurent de la Hire, were a further source of inspiration.