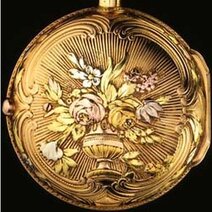 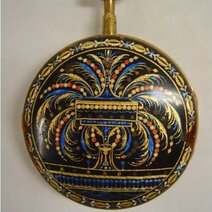 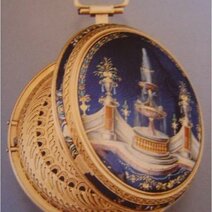 Jewellery brought a touch of refinement to French watches in a rococo (1730-1760) and later neoclassic (1760-1790) style. While the case was enhanced with enamel painting, engraving or repoussé work, the bow, top of the pendant, button and rim were often finished with diamonds. Enamel portraits, case back and bezel were highlighted by a row of precious stones or perhaps a raised pattern in four colours of gold: yellow, red, white and green. The hands were set with rose-cut diamonds and, later, half-pearls.

Late eighteenth-century enamellers began working with combinations of opaque and translucent colours. Another of their techniques, which continued into the 1820s, was to paint translucent enamel on guilloché metal, often with paillons as an additional decor. The edges, like the bezel, were highlighted with a row of rose-cut diamonds or half-pearls, perhaps interspersed with the sparkle of rubies, hard stones or enamel cabochons made to resemble hard stones.

Of all the great capitals, Paris in the nineteenth century was a city apart. Despite the vicissitudes of world events, this was a period of relative financial and economic stability thanks to which bijouterie and jewellery were able to flourish. The great names in jewellery were established and grew, among them Aucoc, Bapst, Boucheron, Cartier, Chaumet, Falize, Froment-Meurice, Lemonnier, Marret, Massin, Mauboussin, Mellerio, Morel, Nitot, Vever and Verger. They were followed in the early twentieth century by Van Cleef & Arpels and Léon Hatot, among others.