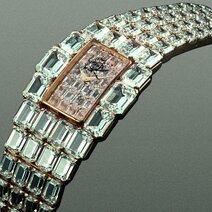 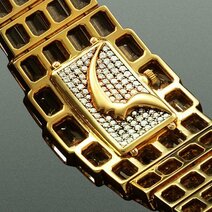 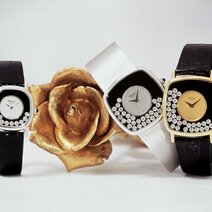 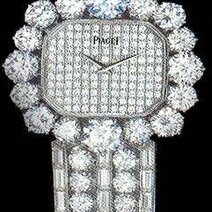 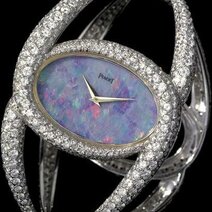 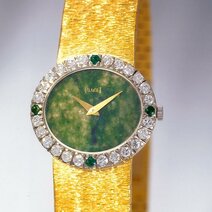 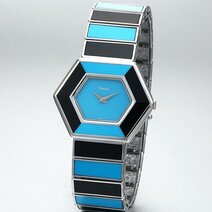 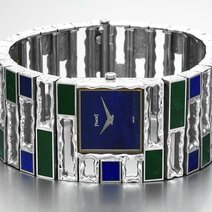 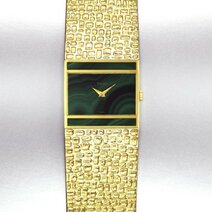 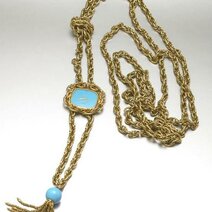 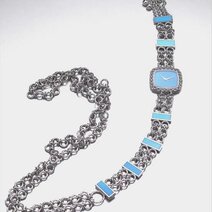 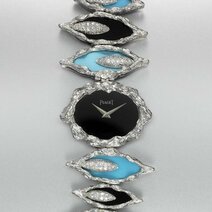 Watches of the 1960s and 1970s were judged as much for the service they provided as for their aesthetic qualities. This growing emphasis on function, often at the expense of quality, was fuelled by the battle in which mechanical watches and electronic watches were engaged... and which had little impact on technical and precious Haute Horlogerie.

In 1956, Piaget launched an ultra-slim watch whose dial was sufficiently large for elegant women to read without having to put on ungainly spectacles. After 1964, the two-millimetre high case incorporated hard-stone dials just seven-tenths of a millimetre thick. Jade, lapis-lazuli, malachite, quartz, tiger's eye, opal, turquoise, onyx, coral, mother of pearl... no less than 30 variations on a theme. Piaget would make a lasting impression on precious watches thanks to these dials, all the more so as their generous size - at the risk of shocking traditionalists - made numerals and hour markers superfluous. Conceived in a jewellery spirit, they can be likened to the diamond-paved models of later years. Such an imposing dial required a wide bracelet, which became a blank canvas waiting to be filled and the catalyst for endless experimentation. In the early 1970s Piaget used hard stones both for dials and to adorn its oversized cuff watches for men and women. More classic in style, they were no less innovative. This was also when the brand reintroduced the age-old tradition of wearing a watch on a precious chain around the neck, a style that went perfectly with the fashions of the day. This was an era marked by social mobility, which sparked a profound transformation in tastes. The jewellery watch, with its bold proportions, adopted the rainbow hues of diamonds, emeralds, rubies and sapphires. Mauboussin would adopt the same white, green, red and blue a few years later for its Arlequin line, this time on smaller watches. In 1976, Chopard allowed diamonds held between two sapphire crystals, to float freely around the dial. The Happy Diamonds watch for men and women was born.

In 1979 then in 1981, two unique creations, both private commissions, earned the distinction of most expensive jewellery wristwatch of their time. First Vacheron Constantin unveiled the Kallista watch, designed by Raymond Moretti. It was embellished with 118 emerald-cut diamonds for 130 carats mounted in yellow gold, and ushered in the Lady Kalla line. As for the Phoebus watch by Piaget, it came adorned with 296 diamonds including one blue diamond, for a total 87.87 carats, mounted in platinum.