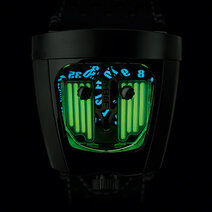 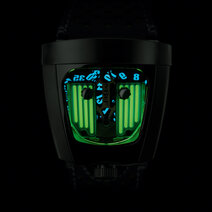 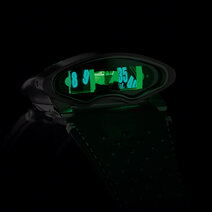 Designer James Thompson ("Black Badger") has brought his touch to two of the machines in MB&F's Performance Art collection. One is the HMX, released in 2015 for the brand's tenth anniversary. Thompson set to work on the "rocker covers" in the HMX's movement, visible under the supercar-style sapphire hood. They are cut from Thompson's signature material, a photoluminescent compound that emits a particularly vivid colour. Unlike SuperLuminova, a liquid lume that is applied to a surface, Thompson's composite comes as solid blocks which are cut into shape either by hand or on a machine. Because it stores more light, the glow lasts for longer. The HMX Black Badger has the watch's signature bidirectional jumping hours and trailing minutes shown by reflective sapphire crystal prisms with a built-in magnifying lens. 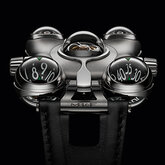