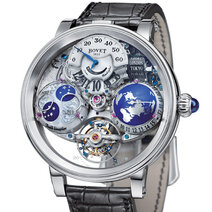 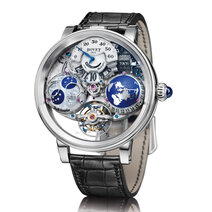 Bovet asked its technicians and watchmakers to clear their mind of everything they had done before, and imagine an innovative, intuitive way of reading the time with, at the centre, the earth and the moon, the two celestial bodies that define time. The result is an extraordinary watch that represents the entire globe on a single hemisphere as a specially commissioned map. It represents world time, in three dimensions, by means of a similarly hemispherical hand that is fixed to the North Pole and which interacts with two concentric rollers displaying city names. The moon is also presented as a hemisphere. Two circular windows follow its curve to indicate the age of the moon as seen from the Northern and Southern hemispheres. This mechanism requires adjusting by just one single day after 122 years. The positions of the earth and moon hemispheres leave room at 12 o'clock for the digital jumping hour display. Above it is a retrograde minutes scale with a power-reserve indicator in the centre. At 6 o'clock, a triple seconds hand is placed under the one-minute tourbillon. 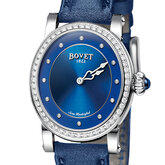 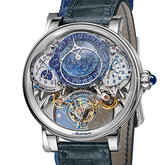 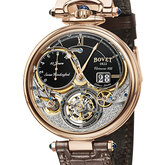 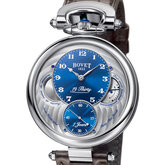 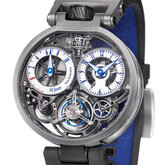 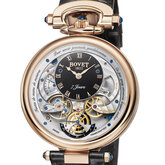