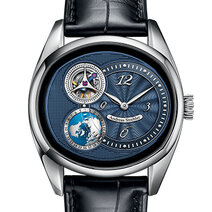 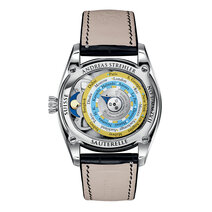 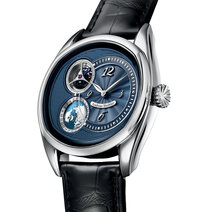 Jules Verne made his journey "from the Earth to

the Moon". Andreas Strehler took the opposite direction, beginning his

odyssey with the Moon, and a series of exceptional precision moon phases, and

master watchmaker's patented remontoir d'égalité. At 8 o'clock on the dial, a

three-dimensional representation of the Earth's northern hemisphere, as seen

from the North Pole, makes a complete counter-clockwise rotation in 24 hours.

to the names of 24 cities, representing the 24 time zones, on a circular ring.

dial, home time on the reverse side, and the corresponding time zone on the

globe are all synchronised; one glance suffices to situate oneself in time. The

the back. Requiring adjustment by a single day after two million years, it adds 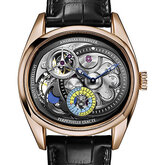