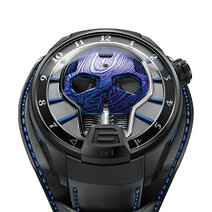 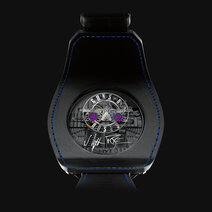 Axl Rose, founding member of Guns N'Roses, was no

stranger to HYT watches, as proven by the Skull Maori seen on his wrist. The

brand's own frontmen were quick to spot his allegiance, and produced a new

model under the singer's direction. Rose chose the HYT Skull as the base, which

he asked to be made from Damascus steel with a vivid blue treatment; the same

colour as the hour-markers that radiate from it. The musician also added two

lateral plaques, at 9 o'clock and at 3 o'clock, that are decorated with a Clous

underneath by the singer himself on the metallised sapphire crystal. As for the

driven by bellows through a tube around the contour of the skull. Small seconds

and power reserve are shown in its eye sockets.