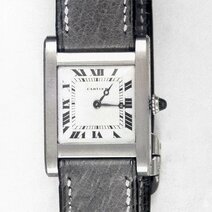 To find inspiration in the machines that were appearing on battlefields in the First World War and create, in 1917, a watch that would become a sign of elegance and good taste is proof indeed of Louis Cartier's remarkable talent.

To send this delicate watch out into the world with the name Tank, without fear of ridicule or of tempting fate, speaks volumes about his nerve. Masculine by name but feminine by nature, the Tank leaves us in no doubt about its charm and fineness. Almost a century later, the Tank has lived through other devastating conflicts and inspired multiple variations on a theme. Since first dazzling the public in 1919, the original rectangular Tank has been cintrée, chinoise, basculante, américaine and française - to name but its most memorable metamorphoses - while remaining forever unique and instantly identifiable. Its silhouette has grown longer or, in sharp contrast, solidly square.

It has embraced curves but always conserved its characteristic case sides together with the powerful symbols of the brand that are its Roman numerals and railroad minute track. The Tank has spontaneously appeared on famous wrists around the world, in particular stars of the silver screen at a time when product placement had yet to be invented, and watches were worn out of pleasure rather than under contract.