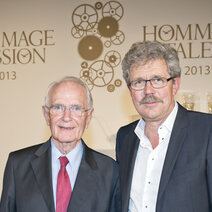 Each year, the Fondation de la Haute Horlogerie in partnership with Bank Julius Baer presents the "Hommage à la Passion" and "Hommage au Talent" awards. Both these distinctions come in recognition of personalities who, through their dedication and expertise, have contributed to the eminence of Fine Watchmaking.

In the words of Giovanni Flury, Member of the Executive Board of Bank Julius Baer, "Naturally, we are delighted to be a partner to these awards. Our sectors share the same attention to detail, a determination to innovate, and a spirit of enterprise. Our values and expertise stem from a long tradition and each day is devoted to ensuring our clients' satisfaction."

This year's "Hommage à la Passion" award goes to Walter Lange, the man who engineered the fabulous reawakening of A. Lange & Söhne. Born in 1924 and great-grandson of the Maison's founder, Walter Lange was destined to take the helm of Lange Uhren GmBH, the family firm established in 1845 in Glashütte whose pocket watches were renowned the world over. The second world war would decide otherwise. On the last day of the conflict, the factory was bombed. Three years later the company's assets were confiscated by the East German regime. It was only in 1990, following the fall of the Berlin Wall, that A. Lange & Söhne was reborn under the drive and leadership of Walter Lange. He was convinced the brand had a future. Time would prove him right. A. Lange & Söhne is now the epitome of Fine Watchmaking from Saxony.

The "Hommage au Talent" award singles out the work of Jean-Marc Wiederrecht. Without him, contemporary watchmaking would no doubt never have conquered new realms where time becomes poetry. This watchmaker was, for many years, the unsung hero, the man behind the scenes who designed and made complicated movements for prestigious brands that would often claim the fruit of his talent for themselves. Not so today.

Jean-Marc Wiederrecht is now associated with timepieces by Maisons such as Hermès, Harry Winston and Van Cleef & Arpels, bringing originality to the mechanics of time as only he knows how.He is the author of countless exceptional timepieces and has filed multiple patents. An aesthete of watchmaking, he has the ability to propose the most complex pieces in the most disconcertingly simple guise.