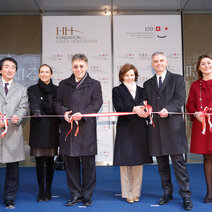 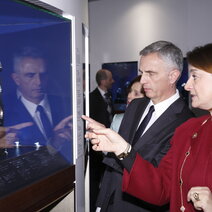 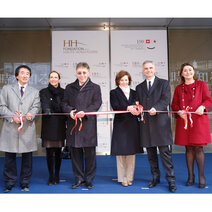 “THE MASTERY OF TIME: A History of Timekeeping, from the sundial to the wristwatch”opens February 7th at the umu event space in Keyakizaka, Roppongi.

2014 marks the 150th anniversary of the establishment of diplomatic relations between Japan and Switzerland. In 1863, the first Swiss trade delegation visited Japan, led by a leading figure of the watch industry in Switzerland. This visit led to the first Treaty of Friendship and Trade between the countries, the following year. Celebrating this special year, the exhibition traces the progression from the moment humans first began to measure time to the present day. It showcases the passion and stories of craftsmen through some of the world’s most precious timepieces, from table clocks and pocket watches to wristwatches. The number of exhibits exceeds 100 and includes many objects on display in Japan for the first time.   Ahead of the public launch tomorrow, the exhibition was opened to the media today, February 6th. Didier Burkhalter, who was elected as Swiss President on January 1st this year, cut the ribbon with his wife at the opening ceremony. Extracts from the official speeches are given below.

Swiss President Didier Burkhalter “Thank you for celebrating the history of diplomatic relations between Switzerland and Japan, and also for celebrating the watch industry. It is my wish that the values both countries share may remain for another 150 years and more. I hope that Japan and Switzerland will continue to appreciate watches and that we will greet the future together.”

Fabienne Lupo, Chairwoman and Managing Director of the Fondation de la Haute Horlogerie “We are honored to organize this exhibition because the Swiss watch industry forms a strong bond between our two countries.  This exhibition shows that Japan and Switzerland will continue to build their relations for many years to come.”

More information about the exhibition "The Mastery of Time" online