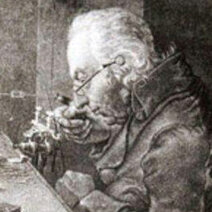 Swiss watchmaker and one of the fathers of precision watchmaking in the Neuchâtel mountains.

Invention of the self-winding watch whose rotor winds the spring in both directions. Known as a perpétuelle or perpetual watch.

In his travel diary, "Expedition to Neuchâtel, May 29th-June 8th 1777", the physicist and naturalist Horace-Benedict de Saussure noted his visit to "Monsieur Perlet (sic), inventor of watches that wind themselves by the movements of their wearer." The minutes of the General Assembly of June 11th, 1777 of the Geneva Société des Arts record that de Saussure informed the Committee that Perrelet manufactured this type of watch, one of which was purchased by the Société des Arts. Since 1993, Joseph Flores has contested this attribution in favour of the Liège-based watchmaker Hubert Sarton (1748-1828), who filed a document with the Académie des Sciences in Paris. Dated December 23rd, 1778, it is the oldest known description of a self-winding watch to date.