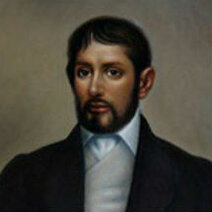 Taught at the Academy of Fine Arts in Paris.

President of the Chronometry Society of Paris.

Despite frequenting the most brilliant minds of his day - Breguet, Berthoud, Janvier, Houriet, Perrelet (Frédéric-Louis), Vulliamy, Winnerl, d’Alembert, Lalande, Thomire, and many others - Moinet never sought attention, which no doubt explains why his name is largely unfamiliar today.

He was hired by Abraham-Louis Breguet as a secretary, to help him draft his horological treatise. This ambitious project, the notes for which are conserved in the archives of Breguet in Paris, was never completed.

Louis Moinet was a theorist and engineer who had various devices built for his own use, including:

He devised a pendulum that made a continuous, circular motion, with the aim of improving isochronism. He researched ways to compensate for variations in temperature, imagined a new anti-shock system, defined a microscope for watchmakers, and invented a ruby escapement beating at 216,000 vibrations per hour that was precise to 1/60th of a second.

His most important and pioneering invention, however, was a compteur de tierces, a counter measuring 1/60th of a second which he had built between 1815 and 1816 by Fortin, a watchmaker with Abraham-Louis Breguet, with Breguet's authorisation.

The counter, which has the form of a pocket watch, is fitted with the high-frequency escapement (216,000 vph or 30 Hz). It has a reset-to-zero function (previously attributed to Adolphe Nicole and patented in 1844), and counters for seconds, minutes and up to 24 hours.

A one-off piece which Moinet had made to assist him in his astronomical observations, it is referred to in the authoritative treatise, Nouveau Traité Général Élémentaire Pratique et Théorique d’Horlogerie pour les Usages Civiles et Astronomiques, which he published in 1848. It resurfaced at auction in 2012, and was revealed to the watchmaking community in March 2013.

Publication of a "Traité d'horlogerie" ("Treatise on Clockmaking") that has become a reference book.