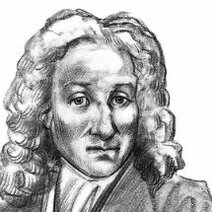 Born at the château Le Vieux clos in Duillier.

Member of the Academy of Sciences in Paris.

Member of the Royal Society in London. Research on the distance between the sun and the earth and on the appearance of Saturn's ring.

Credited as the inventor of a method for drilling gemstones (rubies or sapphires) to use as jewels in watchmaking. Fatio and de Baufre filed a patent for the system. The method, held secret, was to remain an English specialty for some time.

Sealing wax is used to fix the stone to a mandrel mounted on a treadle lathe which drives a diamond graver. Other books explain how artisans made their own drills. The surface to be drilled was coated with a mix of oil and diamond abrasive, the stone attached to a support then drilled.

The method, which was kept secret, would long remain a speciality of English watchmaking. Ferdinand Berthoud was the first to adopt it on the continent, in 1768.