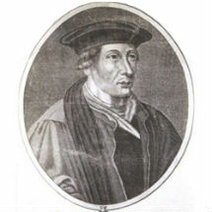 The first holder of the mathematics chair at the Collège Royal (now the Collège de France), founded in 1530. He taught there from 1532 to his death. Helped to popularise traditional mathematics and geocentric astronomy passed down by Ptolemy.

Invented various mathematical and astronomic instruments, in particular sundials, which he described in his treatises.

Designed an astronomic clock for the Sainte-Geneviève library (Paris).