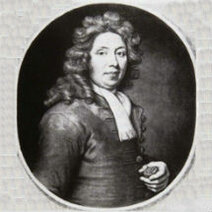 The first English manufacturer to make spiral balance watches, by request and on the basis of work by Robert Hooke. A short time after the introduction of the spiral balance wheel, two-hand watches (hours and minutes) became widespread in England. In France, one-handed watches remained the norm until around 1725 (easier to make).

Construction of the first clocks at the Greenwich observatory.

He was the first clockmaker to number his clock and watch production.

Made the first clock displaying the time equation (difference between the real time of the sun and the average conventional time). It was acquired by William III.