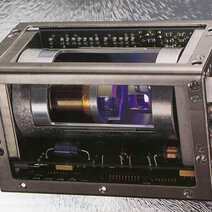 A caesium Clock draws on the hypothesis of stable atomic properties, in particular the frequency of radiation corresponding to the transitions between two energy levels. The atomic frequency standard comprises an atomic resonator which gives the ultimate reference and an electronic part which, using a 5 MHz oscillating quartz, generates an exciter signal of around 9.191 GHz. This interacts with the atomic "stream" inside the resonator to generate an error signal which corrects the frequency of the quartz oscillator to maintain it permanently on the atom transition frequency.

Accuracy of an atomic clock:

Thanks to the atomic clock, in 1983 the standard metre was redefined as the length of the path travelled by light in vacuum during a time interval of 1/299,792,458 of a second.

An opening in the case allowing easy access to one of the watch's internal components, usually the battery.

A heavy metal, greyish white, that is highly resistant to corrosion and difficult to work with.Jewellery and watch cases can be made from...