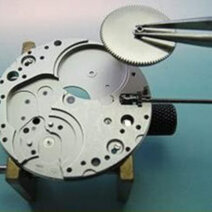 A cylindrical box (the barrel) and toothed disc (wheel), protected by a cover. The barrel, which contains the mainspring, turns freely on its arbor. The mainspring is hooked to the barrel at its outer extremity and to the arbor at its inner extremity. The barrel wheel meshes with the first pinion of the geartrain. As it slowly rotates, its arc varies from one-ninth to one-sixth of a revolution per hour. A hanging barrel (also known as a standing barrel or floating barrel) is one whose arbor is supported at the upper end only, being attached to the barrel bridge with no support from the lower plate.

The quarter-hours are sounded on three, four or more gongs with different pitches, the best-known being the Westminster chimes.

An abbreviated means of referring to a leather watchstrap.