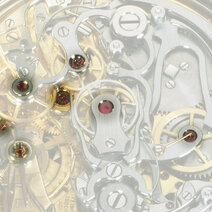 A hole made directly in the brass plate and in which a steel pivot, part of the greatrain or escapement, turns. The problems of friction this caused were solved when Nicolas Fatio had the idea to use drilled natural rubies as bearings. These natural stones were later replaced by synthetic rubies, made in 1892 by Auguste Verneuil.

A new-generation luminous substance, used to coat hands and numerals. It stores light which it then emits in the dark causing the hands and...

A set of wheels and pinions whereby the movement of one sets all the others in motion.There are different types of gears, e.g. winding gears,...