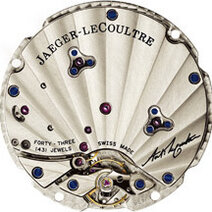 Synonym of size. Sully used this term circa 1715 to denote the layout and dimensions of the different movement pillars, wheels, barrel, etc. Since then "calibre" has been used to indicate the shape of the movement, its bridges, the origin of the watch, its maker's name, etc.

Now designates the movement itself.

The round calibre is the most commonly encountered. It is described in terms of its casing diameter, measured in lignes or millimetres, for example a 10''' / 22.5 mm round calibre. The shape and layout of the bridges is used to distinguish between a bridge calibre, in which each part of the train has a bridge, the revolver calibre, whose barrel bridge bears a slight resemblance to a pistol, the curved bridge calibre, where the bridges curve towards the centre of the movement, and the three-quarter-plate calibre in which the entire train except for the escape-wheel is fitted under a bridge that covers some three-quarters of the movement.

The action of coupling a spring with its balance.

A machine-tool that rotates a workpiece while applying a cutting tool to give the piece the required shape. The lathe, with its multiple...