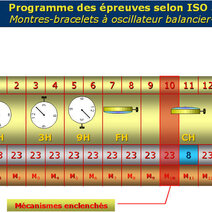 A chronometer is, etymologically, an instrument for measuring the time. With usage it has come to mean a high-precision watch displaying seconds whose movement has been controlled over a period of several days, in different positions and at different temperatures, by an official neutral body. Only mechanisms that have satisfied the criteria for precision of ISO 3159, or its equivalent, are issued with an official chronometer certificate.

In Switzerland, the Contrôle Officiel Suisse des Chronomètres (COSC) has the power to award these certificates. Based on the requirements of ISO 3159, the COSC has also drawn up a set of specifications for the testing of quartz movements.

While a Chronograph can be used to measure an interval of time, it can only use the name "chronometer" if it has been officially certified as such.

Heliotrope is also known as bloodstone. It is a variety of chalcedony that is dark green with red specks. Heliotrope is used as watch dials.

An orange coloured sapphire that has a pink tone. The name padparadsha comes from the Sinhalese word for lotus flower.