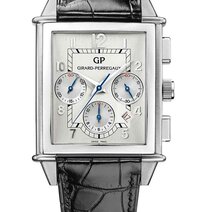 Generally speaking, an instrument which counts and/or records. Chronograph totalisers are counters which indicate the number of revolutions made by the chronograph hand: 30, 45 or 60 minute totaliser / 12 hour totaliser.

Pocket chronographs are sports counters which indicate neither the hours nor minutes but short intervals measured to the nearest fifth, tenth or hundredth of a second.

Pearls produced by oysters that have been surgically injected with bead of mussel shell.

A pattern of repetitive motifs, similar to a tapestry. A die of this motif guides the movement of the tool on a specially-adapted rose engine.