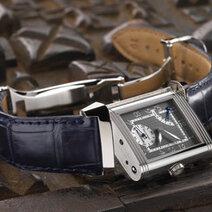 The winding crown is a knurled or fluted button of various shapes, held between the thumb and forefinger and used to wind the watch. Some crowns incorporate a mobile pushbutton for operating a Chronograph mechanism or to release the cover of a hunter case.

The first example of a crown for winding and setting the time appeared on a watch made by John Arnold in 1820. The system was perfected by Breguet for miniature watches circa 1832, and was patented in 1838 by Louis Audemars in Le Brassus. In 1844, Adrien Philippe invented and patented his sliding pinion mechanism which would replace all other systems.

In 1847, Charles-Antoine LeCoultre invented his keyless winding system with its rocking bar and side pushbutton to set the time.

A species or family of gemstones that includes ruby or sapphire, depending on the colour of the gemstone (which in turn depends on the trace...

A decoration of compact spirals on a dial, created using a rose engine.