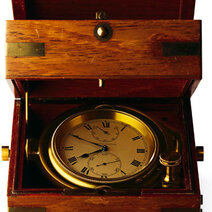 Traditionally, "marine chronometer" refers to a large watch for keeping time onboard ship. In the latter years of the eighteenth century, the term was extended to mean a timepiece:

This precision instrument's main function is to determine longitude at sea. When the ship leaves port, its chronometer is set to Greenwich Mean Time. The ship also carries special tables (e.g. Connaissance des Temps, Nautical Almanac) which indicate, for each day of the year, the time at which the Sun and certain stars cross the Greenwich meridian. To determine the ship's longitude, the appointed officer consults the chronometer to note the time at which the Sun or a star crosses the ship's meridian. The difference between this time and the time, given in the tables, at which the same star or the Sun crosses the Greenwich meridian indicates the longitude of the point of observation east or west of Greenwich.

Also known as the old European cut is an old, round brilliant cut with a very small table and heavy crown.

The resistance of a material to scratching and wear. Hardness is measured using the Moh's Scale. This scale indicates that one substance can...