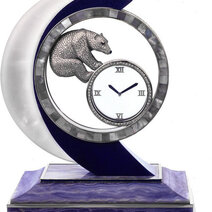 A system patented by Armand Schwob et Frères on January 24th 1889 and used later by Cartier in particular. Inspired by Jean-Eugène Robert-Houdin's clocks, it uses transparent crystal discs with serrated edges to carry the hands. These wheels are driven by pinions, concealed inside the case frame.

The magician and illusionist Jean-Eugène Robert-Houdin (1805-1871) is considered to be one of the inventors of the mysterious Clock whose movement is usually housed in its base.

The stone is encircled by a strip of metal which is pressed over so as to extend slightly over the girdle. This closed setting is the oldest and...

Tool for giving a sheen to metals.