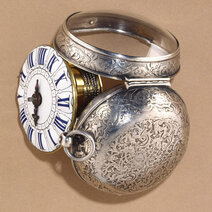 Louis XIV onion with one hand

A style of watch made in France in the late seventeenth and early eighteenth centuries. Its fat, bulbous form suggests an onion. Most oignon watches featured a chased brass case, very occasionally in silver and on very rare occasions gold. In later centuries, oignon became a familiar and ironic term to describe a large, thick watch.

Halfway between a chronograph and a minute counter, the specificity of the chronostop function is to be permanently activated yet can be returned...