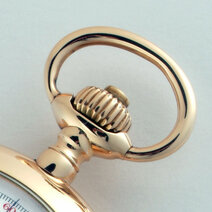 The part of a pocket watch that is fixed to the case middle. The different parts of the pendant are the pipe, the head and the neck. The foot is the invisible part that is soldered inside the case.

After the mid-nineteenth century, the pendant, crown and bow formed a whole whose shape and size were designed to complement the case.

In a wristwatch, the pendant is reduced to a small cylindrical stem on which the winding crown turns. Pendant or keyless winding is by means of the crown as opposed to the winding system on early pocket watches by means of a key or pushbutton.

Any microcrystalline gemstone. Some examples are: Agate, Onyx, Sodalite, Malachite, etc. These ornamental stones are mostly used for watch...