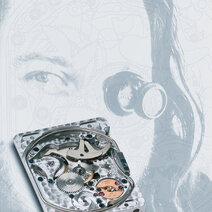 A watch that strikes the hour on demand by activating a pushpiece or a slide (bolt).

There are several types of repeater:

This watch, which first appeared in England circa 1675, strikes the quarter-hour and on demand. Credit for its invention must be shared between Edward Barlow, Thomas Tompion and Daniel Quare, who was granted a patent in 1687. The quarter repeater watch strikes the quarter-hour on demand and on two notes. The half-quarter repeater strikes a high tone to signal when the following half-quarter has passed.

This system strikes the hour, quarter-hour and five-minute intervals on two tones, meaning these two notes can be heard up to eleven times in an hour.

The first mechanisms to precisely indicate the number of minutes elapsed appeared in the early years of the 18th century (1700-1710), for the most part in southern Germany.  Thomas Mudge has traditionally been credited with the invention of this complication, circa 1750.

These mechanisms strike the hour and/or the quarter-hour either automatically (“passing strike”) or on demand by means of a pushpiece or slide. Naturally, watchmakers have dreamed up even more complex mechanisms. The Grande Sonnerie automatically strikes both the hours and quarters at each quarter, and repeats the hours, quarters and minutes on demand. Sometimes it combines with its “little sister”, the petite sonnerie which sounds the hours and the quarters without repeating the hours at every quarter. The mechanism can be silenced using an “all or nothing” or “silent” slide.

Even after the invention of safety matches in 1845 made it possible to consult the time by the light of a candle or oil lamp, master watchmakers have continued to rise to the challenge of the minute repeater mechanism.

Before the watch can be timed, the following operations must be completed:pinning, centring and truing the balance spring...

The calendar now referred to by the majority of countries, introduced in 1582 by Pope Gregory XIII in his reform of the Julian calendar....