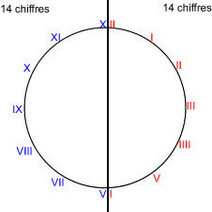 14 numbers on each half of the dial

Roman numerals have never served for calculating but are a system of notation used to indicate numbers. Like the majority of number systems in Antiquity, Roman numerals are written using the additive principle, where I = 1, II = 2, III = 3, IIII = 4, V = 5, (...) VIIII = 9, (...) XVIIII = 19, (...) XXIIII = 24, to limit examples to the numerals that would later be marked on a dial to indicate the twenty-four hours in a day. During the Imperial period, the subtractive principle appeared, where IV = IIII, IX = VIIII, XXIV = XXIIII, etc. Other than for a very few exceptions, this subtractive principle was never adopted for official inscriptions, monuments or sundials. The Clock that struck the hours appeared at the end of the 13th century. When, in the 15th century, watchmakers gave this clock a dial, they chose Roman numerals which were already widely used, notably on sundials. This tradition continued until 1582 and the introduction of the Gregorian calendar. From this point on, dials were no longer divided into the twenty-hour hours of the day, but just twelve sections.

Why did IIII remain?

By upholding this tradition, watchmakers no doubt sought to create a balance that recalls that of the cosmos. Dials that mark the twenty-four hours in a day mirror the apparent movement of the sun. Six in the morning and six in the evening, the times the sun rises and sets at the Spring and Autumn equinoxes, are shown on the horizontal axis of the dial, which recalls the local horizon. Twelve, when the sun is at its Zenith, is placed at the highest point on the dial. Twenty-four, when the sun is at its lowest point, is at the bottom of the dial. An additional reason for keeping IIII is that on a radiant dial where III, V, VI, VII and VIII are set at an angle pointing towards the centre, IV would be difficult to read.

To secure a stone of any cut or size in metal. The stone and the metal are generally precious. The jeweller prepares the hole in which the stone...