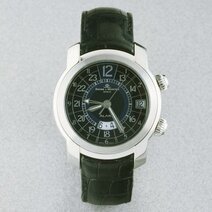 Alarm watches are set by their wearer to sound at a specific time, usually as a wake-up call when travelling although they can serve many other purposes in daily life.

The alarm function can be traced back many centuries. As early as the fifteen-hundreds, certain pocket watches included either an alarm or a passing strike and on occasions both. In 1601 the rules of the Genevan watchmakers guild required that compagnons wishing to attain the rank of master produce a “watch with alarm to be worn around the neck.”

Over time, then with the advent of the wristwatch, alarm mechanisms have grown increasingly smaller and more sophisticated. The first standard-size wristwatch with an alarm that was loud enough to actually wake a sleeper was unveiled in 1947. Its calibre included two barrels, one for the movement and one for the alarm, a technical solution which has since been widely adopted.

Most mechanical alarm watches feature a second crown mechanism with which to set a time, shown on the dial, and wind the alarm mechanism. Sound is produced by a hammer hitting a gong or bell. An alarm is especially useful to travellers and, with this in mind, is increasingly incorporated into watches with multiple time zones for which watchmakers have developed ingenious systems for linking the alarm to one or other zone.

As well as providing a wake-up call, alarm watches can count down to an event, give a reminder of an important appointment, and even avoid the unpleasant surprise of a parking ticket when meter time has run out...