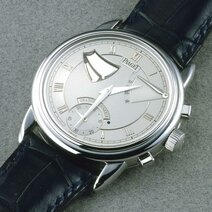 Striking watches indicate the hour and quarter-hour by means of hammers hitting bells or gongs which, like musical instruments, are tuned to different pitches. Unlike the “Petite Sonnerie”, the “Grande Sonnerie” repeats the hour at every quarter.

Striking mechanisms were an early feature of pocket watches, sometimes preceding even hands and dials. Some late fifteenth-century watches already had a passing (au passage) strike which, like a church Clock, sounded every hour. The first striking watches incorporated tiny hammers on bells. Gongs - tempered steel wires invented by Abraham-Louis Breguet - appeared much later, at the very end of the eighteenth century. As well as allowing for a considerably slimmer case, they produce a much clearer sound.

As the wristwatch supplanted the pocket watch in the twentieth century, watchmakers responded with ingenious striking mechanisms which, while small enough to fit inside the more limited space afforded by the case, still produced an audible and pleasant sound. A single gong produces a simple strike whereas a series of gongs sounds a melody known as chimes. Both the Petite Sonnerie and Grande Sonnerie strike the hours and quarters automatically though only the Grande Sonnerie repeats the hour at every quarter. Usually, both are fitted with a slide to silence the mechanism at will. Today, a watch with a passing strike mechanism will almost always have a repeater mechanism too. Striking watches were originally made as a means of telling the time in the dark when artificial lighting, indoors and outdoors, was virtually inexistent.