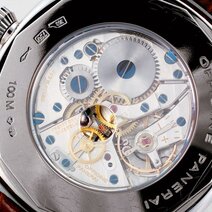 Forerunners of the chronograph, watches with dead seconds and independent seconds appeared in the second half of the eighteenth century. They could measure short intervals but still lacked a return-to-zero function.

The measuring of seconds and fractions of seconds came relatively early. In 1720, George Graham built a device with a pendulum that beat the second and whose hand divided each second into four jumps. When a direct-drive seconds hand was added to pocket watches in the second half of the eighteenth century, watchmakers began searching for ways to suspend its movement as a means of measuring short periods. Their initial solution was to stop the movement itself. This was the principle behind Romilly's dead seconds watch (1754), described in Diderot's Encyclopédie. Its central hand made one jump a second. In 1776, Geneva's Jean-Moïse Pouzait presented a paper describing the principle of a watch with independent seconds. A separate gear-train allowed the seconds hand to be stopped and started at will, independently of the mechanism that drove the hour and minute hands. However, the user still had to note the starting time and calculate the measured interval as the seconds hand could not be returned to zero. Improvements to this mechanism in the nineteenth century together with the invention of the reset function would lead to the Chronograph as we know it today.