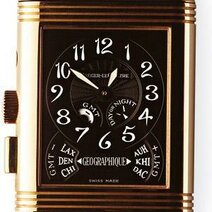 There was an era when each region, each town even, had its own local time, based more or less on longitude. With new modes of transport and the expanding railroads, the need arose for a system of standard time.

And so delegates at the 1884 International Meridian Conference in Washington decided to divide the Earth into twenty-four time zones. Each extended over 15° longitude (one hour) starting from the prime meridian in Greenwich (longitude zero). This system was gradually adopted by all countries.

The first watches with dual time zones had two separate movements and two dials. This system was later improved upon by doing away with one of the movements and introducing a "clutch" mechanism for the second hour hand. Today, one can choose among a vast array of watches with two, three, four and sometimes more time zones, as manufacturers constantly surpass themselves with new ideas for greater legibility and Simplicity of use. Most of these watches use hands, distinguishable by their different colours or shapes, to show time in these additional zones. Others prefer apertures. The wearer pushes a button to select one or other of the time zones, typically symbolised by a city.

Multiple time zone watches often incorporate other functions that travellers will appreciate, such as a day/night or 24-hour indicator (to avoid calling someone in the middle of the night), an alarm or a date change that adapts to the time zone. The rarer "world time" (universal time) watch simultaneously displays time in all twenty-four zones on a rotating disc inscribed with the names of twenty-four world cities.