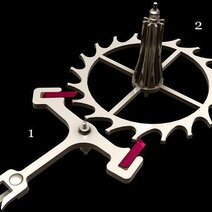 The energy constantly transmitted by the mainspring must be divided up into regular units in order to be able to count out time.

The escapement transforms the energy thus received into impulses. If this organ were not present, the wheels would turn to fast and the mainspring would be unwound in a few seconds.

The escapement constitutes the link with the regulating organ and distributes the impulses to the balance.

The pallet-lever (known in French as “l'ancre” because of its resemblance to a ship's anchor) receives the energy initially provided by the mainspring through the impulses of the pallet-wheel. The role of the pallet-lever is to transform the circular movement of the wheel into an alternating movement to drive the balance. It performs a rocking movement corresponding to the tick and tock sounds heard when a mechanical watch is running.