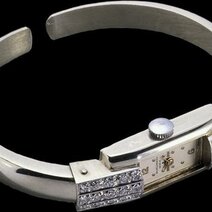 Marquise watch with articulated bracelet on each side of the case

With the return of peacetime in the 1950s, women cast off their wartime clothes in favour of feminine styles. The diamond returned, accompanied by platinum and white gold for evening wear. Yellow gold lent warmth to coloured stones - turquoise,amethyst, topaz, coral and emerald - for daytime. The Marquise watch by Baume & Mercier, first proposed in 1948, gave multiple expression to the style and personality of a bijou-watch. With a Lépine or hunter construction, with or without stones, it lent itself to every occasion, including the most elegant evening dress. The price to pay for success was to be relentlessly copied.

While French jewellery remained the dominant style in Europe and the United States, new currents, independent of Parisian dictates, were beginning to emerge. These were especially evident in Italy, with Bulgari, Cusi, Faraone, Fasano and Settepassi whose creations had nothing to envy those of certain French firms.