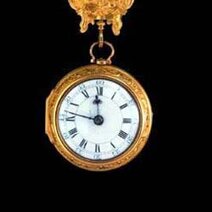 Thanks to Huygens and his invention of the spiral balance spring in 1675, the jewellery watch became a practical timepiece. Elaborate decorations gave way to greater sobriety. Until now, little had distinguished French, German, Genevan and English watches in terms of movement or decoration. After 1675 each country began to develop the characteristics that would identify its production. Until the 1730s, French, Swiss, English, German and Dutch watches favoured engraving and enamel painting over precious and hard stones.

From 1730 the watch again became an important addition to both masculine and feminine dress. Soon it could be seen hung from a chatelaine, clipped to the waist. A veritable phenomenon of fashionable eighteenth-century society, a typical chatelaine comprised a hook that fitted over the belt, with engraved and chased plaques highlighted with enamel and perhaps even pearls or precious stones, decorated with the same motifs as the watch and its accessories. Between three and nine chains hung from the chatelaine. They carried the watch, its key and any number of essential items such as a wax seal, phials, a needle case or a sketching kit.