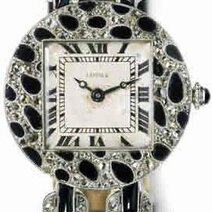 Circa 1910 saw the advent, in reaction to late Louis XVI style, of Art Deco. Its consecration came with the Exposition Internationale des Arts Décoratifs et Industriels Modernes, in Paris. Scheduled for 1916, it was put back to 1925 after the First World War. Jewellers Louis Boucheron, Louis Cartier, Raymond Templier and Alfred Van Cleef sat on the committee for La Parure.

Wristwatches after 1910 adopted a much smaller range of colours. Diamonds were now only paired with sapphires or onyx, all mounted in platinum, the new metal for jewellery.

Ancient Egyptians of the Eighteenth Dynasty (1551-1306 BC) matched platinum with gold for certain pieces of jewellery. Platinum hieroglyphics adorned a casket made 720 years BC. In 1520 in what is now Colombia, the Spanish conquistadors encountered a metal unknown to them, and which they disparagingly called platina or "little silver". It wasn't until 1741 that a sample found its way to Europe. However, attempts to work with platinum were thwarted by its unusually high melting-point - 1,772°C compared with 1,063°C for gold and 961°C for silver - when a hundred years before Christ, pre-Colombian Indians had been using it to fashion jewellery. In 1751 the Swedish scientist Theophil Scheffer became the first to melt platinum by combining it with small amounts of arsenic. In 1780, the French goldsmith Marc Etienne Janety made the first precious objects in platinum for Louis XVI, including several parts for watch cases. Only in 1782 did Lavoisier achieve the first real melting of platinum by directing a continuous stream of oxygen on the metal. Little by little, jewellers were seduced by this unalterable white metal, whose blue-tinted whiteness perfectly reflects light through diamonds.