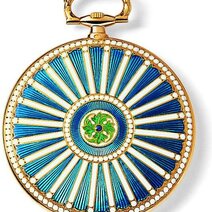 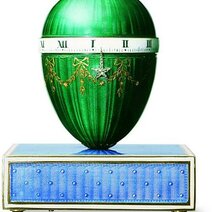 In the pivotal years between the nineteenth and twentieth centuries, decorative enamel reached a new level of sophistication with Fabergé in Saint Petersburg. The company owed its reputation to Peter Carl Fabergé, who opened a branch in Moscow in 1897.

Fabergé's art lay in its association of late Louis XVI style with a palette of one hundred and forty-four translucent enamels on guilloché gold or silver. The company's reputation travelled beyond Russia and, though best remembered for the Easter Eggs it made for Tsars Alexander III and Nicholas II, including some with animated scenes, Fabergé also had a far-reaching influence on jewellery. Cartier in particular imagined new combinations of colours, such as blue and green or purple and green, sometimes edged with white enamel. These, together with monochrome enamels, were applied to a guilloché base, often completed with garland-style patterns, for the Parisian jeweller's clocks, repeater clocks and watches.