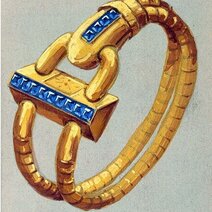 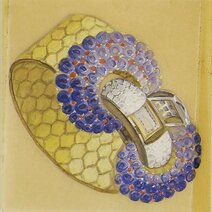 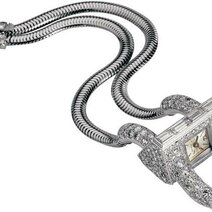 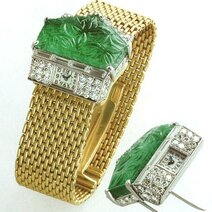 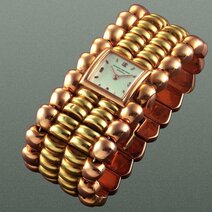 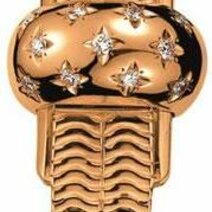 In a continuation of the second Art Deco period, which began in 1925, nineteen-thirties jewellery was dominated by white and by geometric forms, both in patterns and in cuts for stones. The baguette watch slowly evolved into the rectangular watch. Meanwhile, watches were ingeniously incorporated into handbag clasps, or worn as a brooch with slats inspired by automobile grilles. In 1933, Van cleef & Arpels filed a patent for "a means of mounting precious stones." This would give rise to the "Mystery Setting", a name it patented in 1936. Panels hiding the dial, lug covers, bracelets and clasps were covered with precious stones using this technique.

In 1936, Verger created for Van cleef & Arpels the famous gold Cadenas watch, sometimes adorned with diamonds, sapphires or rubies. It remained in the jeweller's collection until the early 1960s and reappeared at the end of the 1990s. Cartier,Jaeger-LeCoultre and Mauboussin were among those who explored similar models, also by Verger. Transformable watches came back into style. Some hid their dial behind a cover. They could be detached from their bracelet and worn as a brooch or on a scarf. The 1937 World Fair in Paris unveiled the trends that would prevail over the coming decade, with the return of yellow gold and fantasy or asymmetric shapes.

The 1940s bore the consequences of war and of the 1929 Wall Street Crash. A new aesthetic, built around a return to curvilinear forms and, most importantly, more imposing volumes, gave watches and jewellery a sculptural quality that masked the absence of precious stones, often replaced by aquamarine, topaz, amethyst or synthetic gems. Parisian jewellers such as Boivin, Boucheron, Cartier, Chaumet, Mauboussin, Mellerio, and Van Cleef & Arpels set trends on an international scale. Their bracelet-watches, in which dial and movement were contained in a cylinder, ring-watches and clip-watches inspired imitations by jewellers on the other side of the Atlantic. As of the early 1900s, synthetic ruby then sapphire were produced using a method, still used today, developed by Professor Auguste Veneuil. The incomparably lower cost of these imitation stones meant they could be mounted, in much greater size and number, on gold rings and other jewellery.