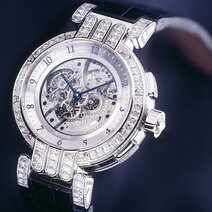 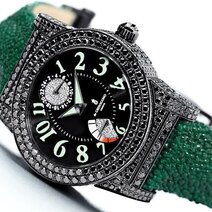 The western world emerged from a prolonged period of economic decline, and soon Europe was sharing American aspirations for greater fulfilment. The revival of traditional mechanical movements and burgeoning demand for high-end watches were matched by a growing market for vintage wristwatches. The eclectic style of watches of this period reflected the prevailing artistic and cultural crisis. In the absence of any clear ideological current or universally-acknowledged trend, comparable to Art Deco or post-war Modernism, creativity looked to the past and put a new spin on old ideas. More modestly proportioned, the jewellery watch took its cue from Art Deco and adopted semi-precious stones in rainbow shades.

The 1990s were spent in search of stability, an obligation in the world's changing economic climate. Watch companies were no exception and, looking to their origins, proposed watches that were heavily influenced by their heritage and past. Yet some pioneered new ground. In 1996, De Grisogono dared to elevate the black diamond - previously relegated to industrial grinders and bores - to the rank of precious stone. Thus adorned, its watches took on an immediately recognisable personality. Shortly before, in 1991, Harry Winston had created Galatea, a one-off watch in rhodium, a metal in the platinum group and notoriously difficult to work with. Inspired, the jeweller dared to combine traditional complications with the most precious stones in watches for both a masculine and feminine clientele. In 2001 the brand unveiled its first piece jointly imagined with master-watchmakers and creators. The diamond-studded platinum cases of the Opus line have gone on to embrace retrograde seconds, rotating hours, resonance chronometers, perpetual calendars, tourbillons, minute repeaters and cathedral chimes. All these complications originate in the Haute Horlogerie of yesteryear yet, thanks to an unarguably contemporary style, are turned towards the future.