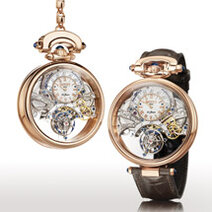 Transparency, lightness and chronometric performance were the touchstones that guided the watchmakers and craftsmen at BOVET as they worked side by side to create the Amadeo Fleurier Braveheart. The foremost innovation lies in the flying tourbillon – which alone accounts for three of the watch's six patents – as the backdrop for the double coaxial seconds. Transparency is de rigueur and thus, by means of an ingenious solution, none of the going-train wheels extend above the tourbillon carriage which appears to be in complete levitation. This visual mystery coincides with enhanced performance, thanks to the new balance and spring assembly. Driven by the hand-wound movement, the reversed hand-fitting fulfils its raison d'être when enclosed in the majestic 45.20mm Amadeo convertible case. On one side, hours, retrograde minutes and seconds. On the other, time is counted by hour, minute and second hands, while another hand measures the long 22-day power reserve. A record held by this limited edition of 22 movements. 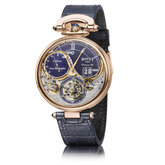 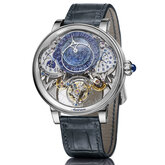 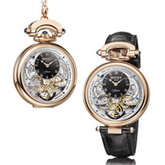 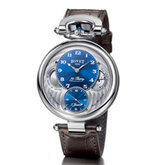